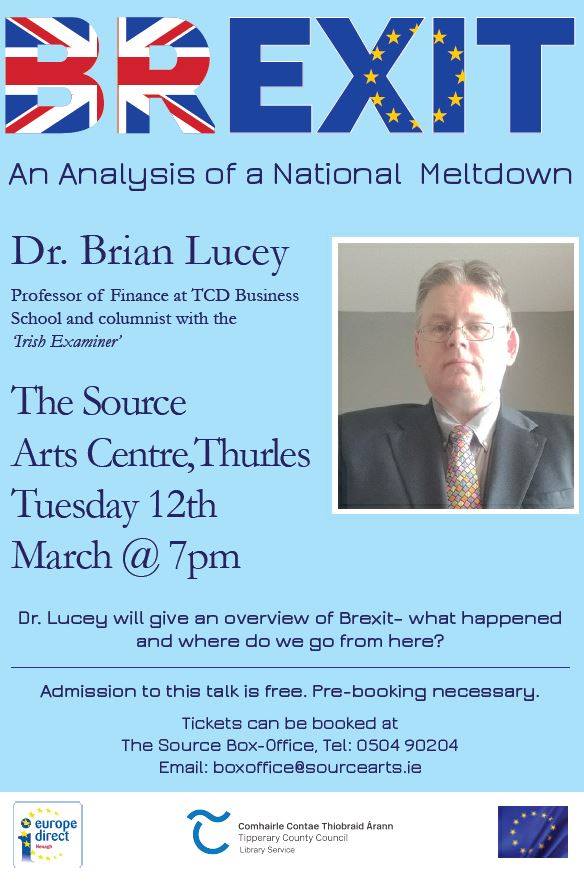 ‘Brexit: An Analysis of a National Meltdown’

Nenagh library is the Europe Direct Information Centre (EDIC) for counties Tipperary, Limerick, Cork and Kerry and as part of our 2019 Programme of Events we are delighted to welcome back Dr Brian Lucey of Trinity College Dublin, School of Business. Dr. Lucey will give a talk entitled ‘Brexit: An Analysis of a National Meltdown’ in the Source Arts Centre, Thurles on Tuesday, 12th March at 7 pm.

A graduate of TCD, with a First Class degree in Economics in 1984, Professor Lucey has worked as a statistician in the Department of Health and as an Economist in the Central Bank, prior to joining TCD. He has studied at graduate level in Canada, Ireland and Scotland, and holds a PhD from University of Stirling. He is columnist with the ‘Irish Examiner’ and writes extensively on economics.

Dr Lucey held a very successful talk in Nenagh Library on the 28th June last year titled “Brexit: Not as bad as you think”.  At the time we were nine months away from Britain’s departure date of the 29th March 2019

. Now with a rapidly approaching deadline and still mired in uncertainty, Dr Lucey returns to talk about ” Brexit: An Analysis of a National Meltdown”.