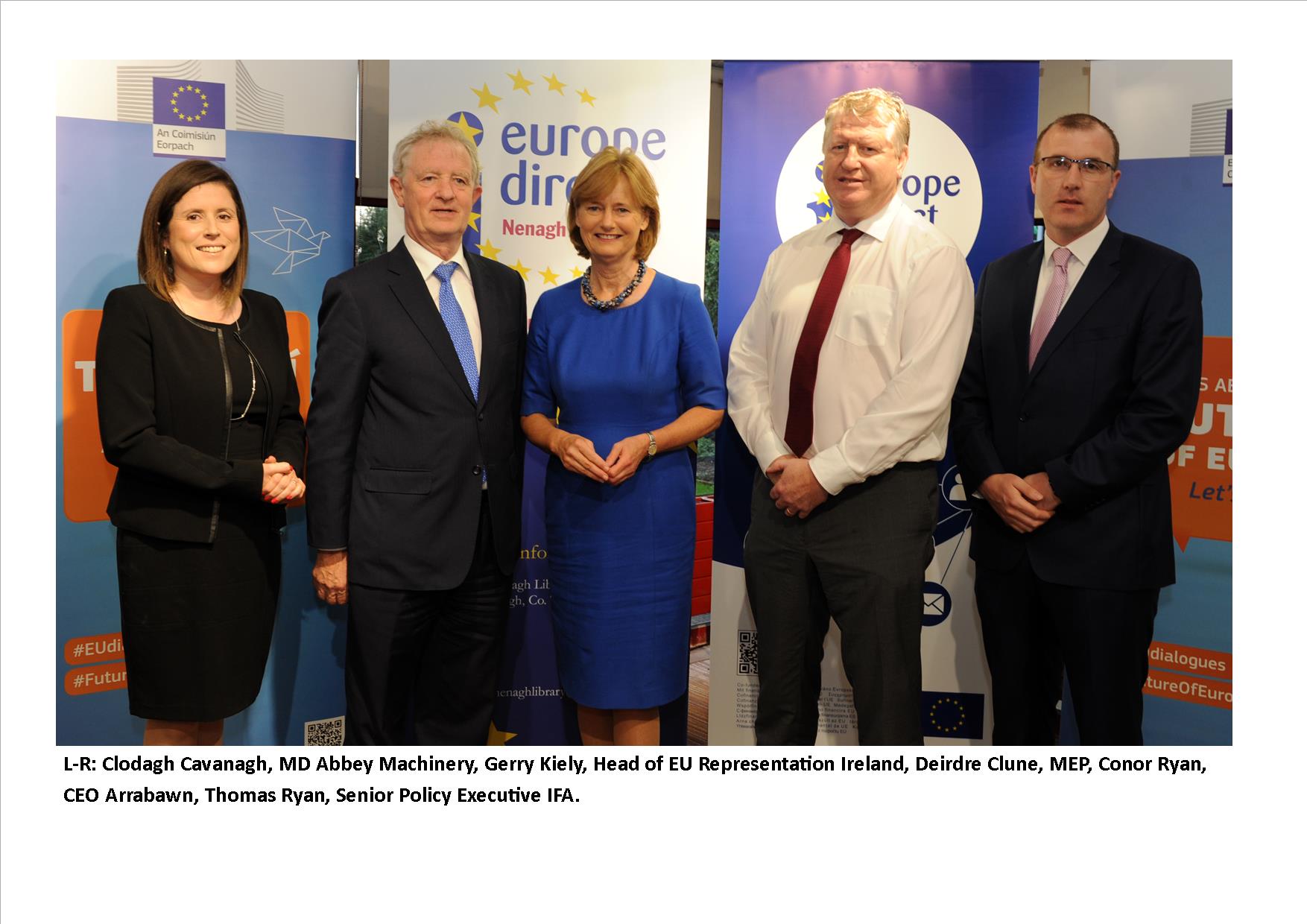 Nenagh library hosted a Citizens Dialogue, entitled “Irish Food and Farming in a Changing Europe” on Thursday 13th September. Speakers on the night included Gerard Kiely, Head of the European Commission Representation in Ireland and Thomas Ryan, Senior Policy Executive, Irish Farmers’ Association. The talk was followed by a panel discussion with Clodagh Cavanagh, MD of Abbey Machinery and Conor Ryan, CEO of Arrabawn Co-operative Society Ltd. Gerry Kiely spoke about the challenges facing the EU, stating that a strong and progressive EU was crucial for the future wellbeing of Ireland.

Thomas Ryan, Senior Policy Executive, Irish Farmers’ Association, reminded those present that farming and food production are Ireland’s largest indigenous sector, supporting 300,000 jobs and contributing €26bn in turnover to the national economy. The EU’s Common Agriculture Policy (CAP) continues to shape the direction of food production in Ireland. In the current round of CAP negotiations increased environmental ambition, changes to direct payments and the possibility of greater autonomy to member states will lead to greater challenges for Ireland. Brexit will also have a significant effect on Ireland’s agri-business sector and we are in danger of giving more weight to the political aspects of Brexit rather than the economic aspects.
As the talk moved into the panel discussion Clodagh Cavanagh and Conor Ryan gave a short overview of their respective businesses. Each of the four panellists were asked to comment on Brexit – how they anticipate it will impact on their sector and what plans they are making to respond to this challenge.
In discussing the issue of a vibrant rural economy, panellists were asked their views on the importance of a strong Common Agriculture Policy and thriving agri-food sector for their own businesses and sectors. Jim Finn, of Tipp FM’s Ag-Report, who was moderator on the night, then asked each one what they saw as a future role for the European Union in supporting the rural economy.

The audience were very much involved with this discussion, voicing their opinions and concerns to the panel. They were glad of the opportunity to engage with Gerry who represented the EU side of matters and Thomas, who put the case for farming and agri-business.

As Europe Direct Information Contact (EDIC) for counties Tipperary, Limerick, Cork and Kerry, part of Nenagh Library’s remit is to inform citizens of current developments within the EU and through our citizens Dialogue on “Irish Food and Farming in a Changing Europe”, it was obvious that there was a concern amongst those working in agriculture and the agri-business sector as to what the future holds with the current CAP negotiations.