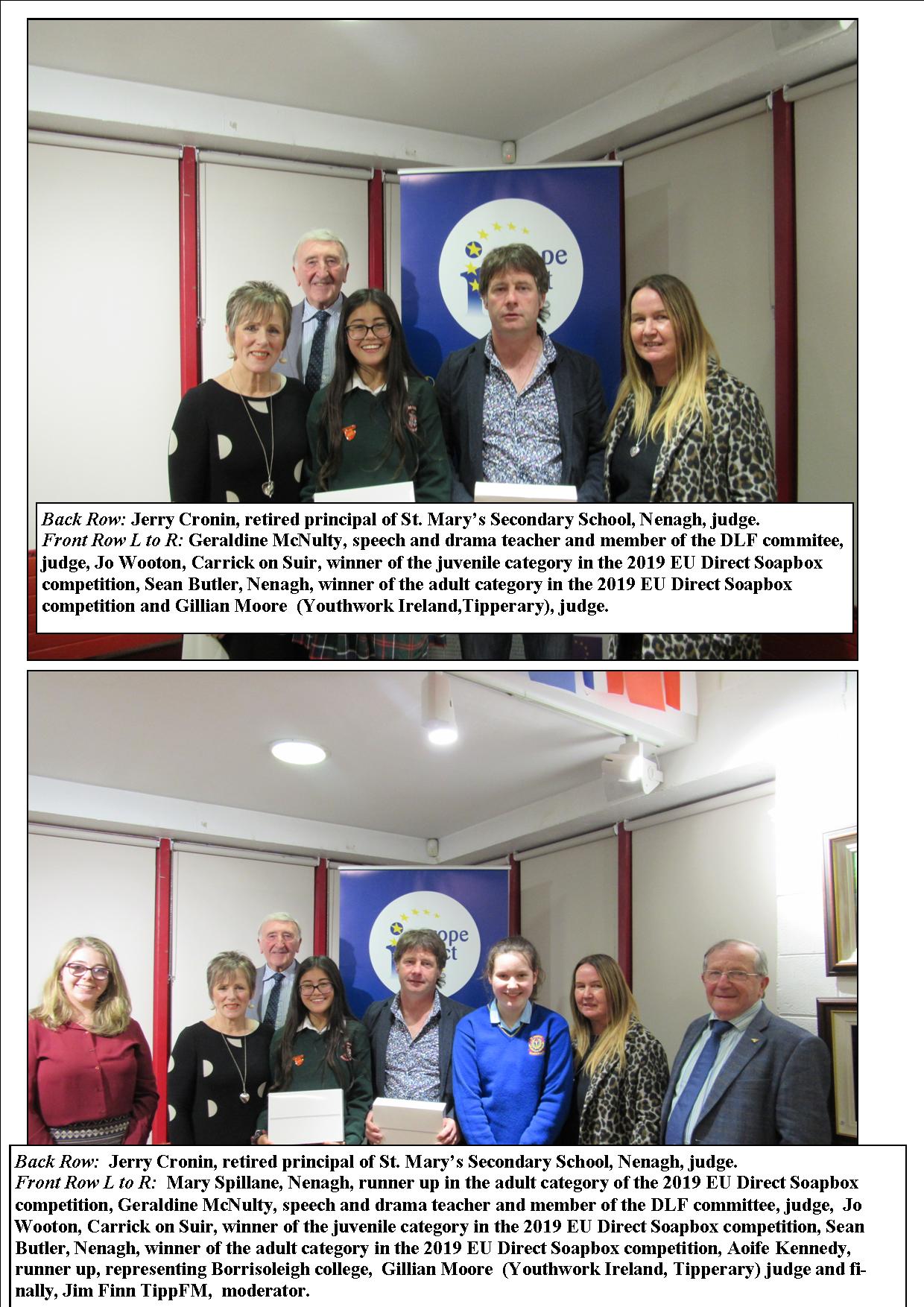 Nenagh Library held the last of it’s EDIC events for 2019 on Tuesday, 22nd October with it’s annual soapbox and this year we were delighted with the increased level of participation from south of the county as well as from our neighbouring county. As a Europe Direct Information Centre for Tipperary, Limerick, Cork and Kerry, it was gratifying to see Co. Limerick represented at this event.

2019 also saw increased participation from schools as well as individual entries. Coláiste Chiaráin from Croom, in Co. Limerick, CBS Nenagh and St. Joseph’s College, Borrisoleigh joined with Borrisokane Community College, Newport Community College and the Ursuline, Thurles in debating the motion that ‘Climate Change is not My Problem’ and we were pleasantly surprised at the thoughtfulness of their arguments and the confidence with which they delivered them.

As before, there was a much smaller pool of participants debating in the 19 and over category than in the 18 and under category; a pity really as those who did argue the motion in the adult category were excellent and well worth hearing.

Unsurprisingly all were against this motion, bar one, and all argued passionately that yes, climate change is our problem and so we must act now to fix it. Listening to those speaking it was clear that this was a subject that they were knowledgeable about and very much invested in. Staff at Nenagh EDIC were impressed with the arguments put forward during the soapbox and did not envy the judges their task of narrowing down the speakers to one winner in each category and one runner up. But there can be only one and as expected it proved difficult for Gillian Moore (Youthwork Ireland, Tipperary), Geraldine McNulty, speech and drama teacher and member of the DLF committee and former principal of St. Mary’s secondary School, Jerry Cronin, to decide who had the edge on the night.

Eventually there was white smoke though and we were pleased to congratulate Jo Wooton from Carrick on Suir who won in the 18 and under category and Sean Butler, from Dolla, Nenagh, who won in the 19 and over category. Both received an iPAD, sponsored by the European Commission Representation. Our winners will now go forward to the national finals of the Soapbox which will be held in Dublin on the 20th November and we wish them both the best of luck.

Runners up on the night were Mary Spillane from Nenagh and Aoife Kennedy, representing Borrisoleigh Community College. Both received prizes of vouchers organised locally by Nenagh EDIC.

It should of course be acknowledged that great support and encouragement was no doubt given to each entrant, in both categories, by partners, family members and teachers and we would like to thank everyone who facilitated those who took part in our Soapbox this year. We would especially like to commend the staff members of those schools whose students spoke so eloquently and with such maturity on this topic. Truly, they were a credit to their school.