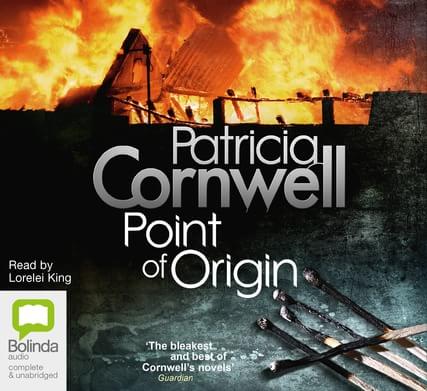 Point of Origin by Patricia Cornwell Read by Lorelei King

The clues to a series of remorseless killings go up in smoke – and only Kay Scarpetta can find them.

A farmhouse destroyed by fire. A body amongst the ruins.

Dr Kay Scarpetta, Chief Medical Examiner and consulting pathologist for the federal law enforcement agency ATF, is called out to a farmhouse in Virginia which has been destroyed by fire. In the ruins of the house she finds a body which tells a story of a violent and grisly murder.

The fire has come at the same time as another, even more incendiary horror: Carrie Grethen, a killer who nearly destroyed the lives of Scarpetta and those closest to her, has escaped from a forensic psychiatric hospital. Her whereabouts is unknown, but her ultimate destination is not, for Carrie has begun to communicate with Scarpetta, conveying her deadly – if cryptic – plans for revenge.

Chillingly mesmeric in tone, labyrinthine in structure, Point of Origin is Patricia Cornwell at her most dazzling.