Title: The Saddest Girl in the World

A fishing village.  A small stone pier, drab and grey in the early morning, worn and weathered, its pillars continuously washed by the tides, and without a person in sight.  A single fishing boat departs the harbour, its engine a faint rumble that gradually fades away; around the pier piles of nets and a few small boats drawn up on the shore.  It is cool and damp, the end of summer.  Walking up the road from the pier and looking back one sees the endless sea, stretching horizontally, gun-metal grey, pressed flat by the weight of sky, and in the far distance several islands inhabited only by seabirds and rabbits, dark slivers on the leaden surface.  Seagulls fly over the head of the pier, scavenging for fish guts.  Continue up the road into the village and come to the church, with its cross that lights up at night.  The villagers are proud of their church and go without fail to Mass on a Sunday where they plead eternal salvation for their own souls and for the souls of those already departed.

What does she feel?  The worst thing is that as she pedals up Station Road forcing her legs to pump, one after the other, without the energy or desire to keep moving them, grinding down, winding down, she feels nothing for Billy, only sorrow for herself at the loss of her brother who had been alive and was then, in an instant, dead; all her life and energy is sucked out of her by the weight of it, a burden larger than the universe and one of which she suddenly realizes she will never, not even for an instant, really be free, not while she does her homework, plays patience in her room, pedals her new bike, eats her dinner, all these things that she must go on doing because life goes on, even after a boy slips on the pier ladder and cracks his head on the wall and falls in the water and his own sister, further up the pier, hears the splash but thinks it’s a seagull diving for fish and goes away home, and he never comes home for his tea and the divers find him that night, under the pier with only the grey-green, sharp-fanged conger eels slipping in and out of the pillars for company, and his soul already gone straight to hell with none of his family to keep him company, with all this to weigh her down, is it any wonder she is the saddest girl in the whole world?
It isn’t until she is at home, in the bathroom, putting the towel to soak in cold water, that she remembers her pile of clothes, next to Billy’s, two abandoned heaps upon the strand. 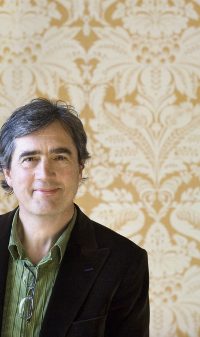