The townland of Twomilebridge, as the name suggests, lies two miles east of Clonmel. Its comprises .28 of a square mile and is bounded by two rivers, the Anner to the east, and the Suir to the south. The bridge referred to in the place-name is the Anner Bridge which spans that river shortly before it enters the Suir. Today Twomilebridge is home to the C & C Group factory best known for producing Bulmers cider.

Across the road from one the factory entrances, set into a section of wall, is a white marble plaque which details a tragic event which occurred there, 100 years ago.  The plaque marks the place  (or close too) where Volunteer James O’Keeffe was shot dead in skirmish with soldiers of the Devonshire Regiment on the night of the 5th/morning of the 6th of February 1921 (at approximately 1am). Several newspaper reports from the time state that O’Keeffe was 23 year old (The Nationalist, 09/02/21 p.13 & Nenagh News, 12/02/21, p.4). However information from both 1901 and 1911 census confirm that he was in fact 26 years old. He was a farmer, and died no more than a mile from his home in Moangariff. The plaque tells us that O’Keeffe was attached to B Company, 5th Battalion, 3rd Brigade (Tipperary) of the Irish Volunteers.

Many of the facts surrounding the events of that fateful night seem in little dispute. However the exact circumstances of O’Keeffe’s shooting appear vague.  Pension’s records from the Bureau of Military History (see below) tell us that on Saturday night the 5th of February men from ‘A’ (Clonmel) and ‘B’ (Kilsheelan) Companies of the 5th Battalion were engaged in in a road trenching operation at Twomilebridge. Denis Marnane (The 3rd Brigade: A History of the Volunteers/IRA in South Tipperary 1913-21, 2008, p.37) in his book on the history of the 3rd Brigade describes how the trenching of road between Clonmel and Carrick-on Suir at this time was a frequent occurrence. This involved the digging of a wide trench across the road to impede the movement of military vehicles in the area. Roads were also blocked with trees and other materials. On this occasion ‘A’ Company were trenching and ‘B’ company were on outpost duty. 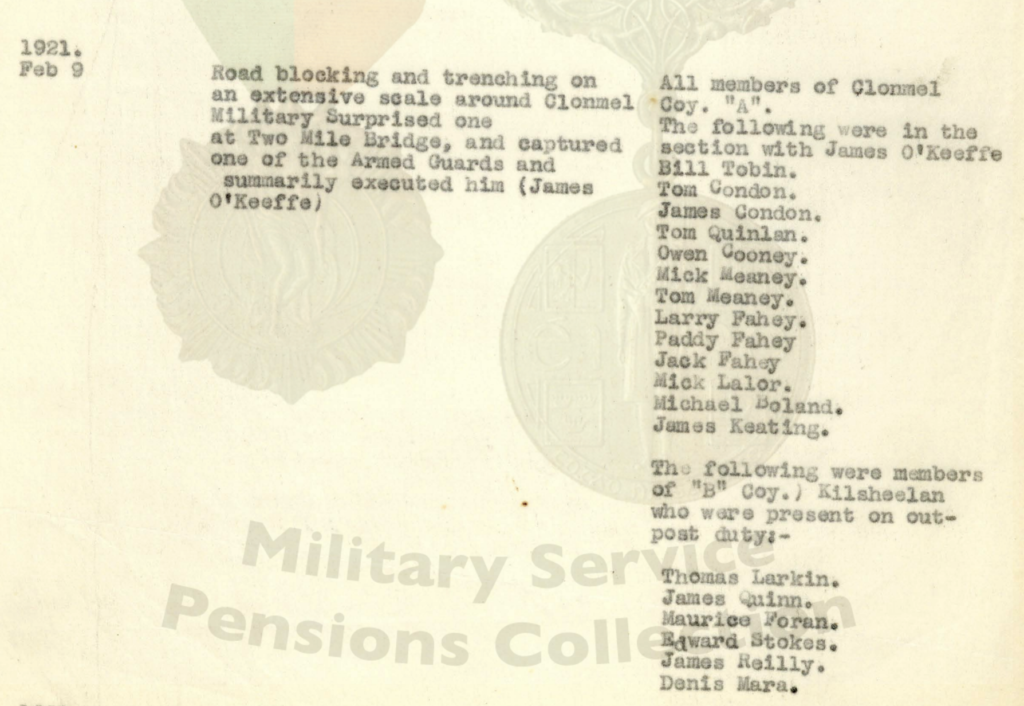 It is hardly surprising being as he was from Moangariff that O’Keeffe found himself on outpost duty on the Clonmel side of the operation. Newspaper reports from the time and a report on a military court of inquiry provide accounts of what happened next (Freeman’s Journal 08/02/21, p.5). Soldiers of the Devonshire Regiment garrisoned at Victoria Barracks in Clonmel were out on patrol that night. Martial law was in effect. A military officer giving evidence under oath said that…

They heard some digging and immediately went to investigate. As he approached the spot he saw a man walking up and down. He was obviously a sentry. He was surprised and overpowered. He was wearing a woman’s pink hat with the hat band pulled down over his face. He refused to give his name and said that he was returning from a dentist’s in Clonmel. He was left in charge of three soldiers while the patrol went forward.

When the soldiers were within ten yards of the digging a light was flashed on them and shots were fired by the volunteers. The ensuing exchange of fire left a Corporal of the Devonshire’s wounded in the shoulder. It would be claimed by the soldiers at the military court of inquiry held in Clonmel in March, that O’Keeffe was shot (and killed) while attempting to escape when the gunfire broke out initially. The volunteers abandoned their picks and shovels and withdrew from the area. Afterward newspaper interviews with residents of Twomilebridge would disagree on the duration of the shooting. Some saying it lasted about half and hour while others saying that it seemed like no more than a couple of shots.

The soldiers commandeered a donkey and car from a local shop owner (Walsh) to convey the wounded Corporal and the body of O’Keeffe back to the barracks in Clonmel. A day later O’Keeffe’s father and sister would identify the body. At least two wounds were evident one in the body and one in the head. A party of military accompanied the funeral cortege as far as Silversprings Cross from where the they were allowed to continue unhindered to Powerstown Parish Church for funeral mass and burial.

The pensions documents from the Bureau of Military History describe O’Keeffe as being summarily executed. Denis Marnane in his book referenced above already suggests that he was killed not according to the rules of war. Nonetheless a military court of inquiry held in lieu of an inquest returned a verdict of justifiable homicide. A soldier would testify that when O’Keeffe…

heard the military approaching he threw something away in the hedge. Immediately the firing at the military began he made a dash to escape, and got about four yards when the witness opened fire on him. the first shot missed but he fell on the second

His evidence would be corroborated by his fellow soldiers (The Nationalist, 12/03/21, p.7).

A news report from the Nationalist shortly after the shooting describes O’Keeffe as a well known and respected as well as athletic, sober and industrious. Requiem Mass for O’Keeffe held in the Franciscan Church in Clonmel on the 15th of February was said to have been crowded to the doors. At the next meeting of Clonmel District Council a motion sympathising with the O’Keeffe family was passed (The Nationalist, 16/02/21, p.16). All of this would suggest a degree of public sympathy for the family.

The deadly events at Twomilebridge on the night of the 5th of February 1921 serve to underscore the turbulence and volatility of this period in South Tipperary. It is fitting that we remember James O’Keeffe, 100 years on, who gave his life for for the cause he believed in.

O’Halpin, Eunan (2020) The Dead of the Irish Revolution