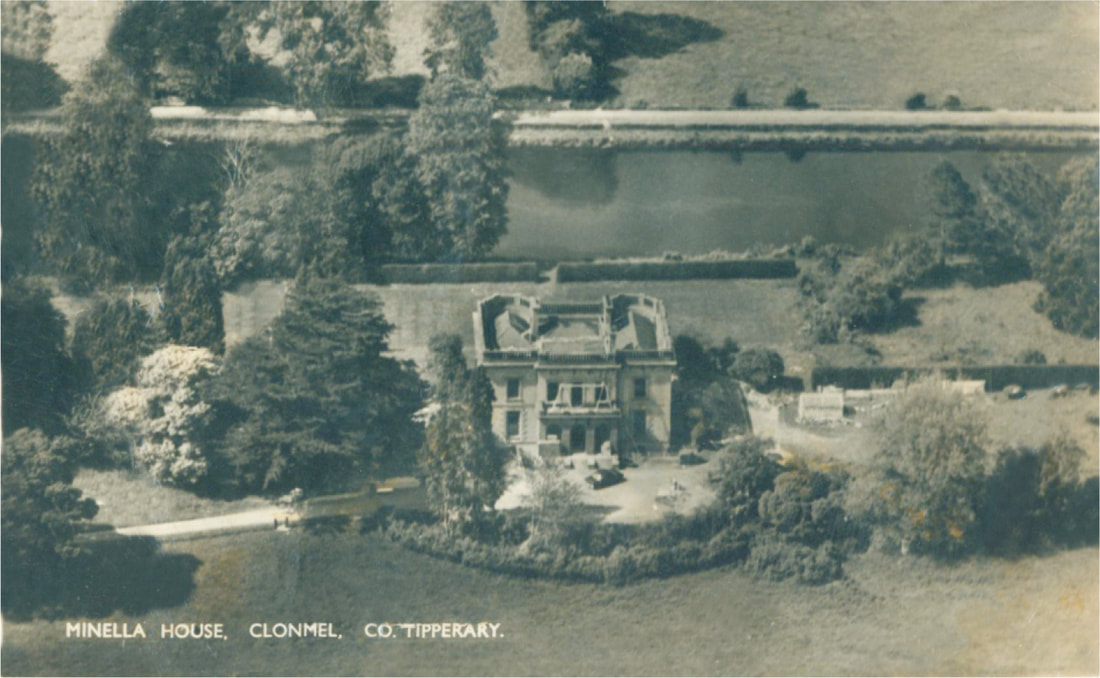 The Malcolmson’s were among the most successful Irish Quaker Industrialists of the 18th/19th centuries. They had extensive business interests across the south east of Ireland most notably in Portlaw, Co Waterford and Clonmel. By the middle of the 1800s several branches of the Malcomson family had amassed fortunes from industries such as corn milling and textile manufacturing. The Malcolmsons had come to Ireland from Scotland in the 17th Century. David Malcomson (1765-1844) took up employment with a cousin and fellow Quaker Sarah Grubb at Anner Mills near Clonmel.  In 1801 David went in business for himself and the rest as they say is history. A generation later the family could claim to employ 1400 people in Portlaw and 700 between Clonmel and Carrick-on-Suir in their thriving business empire.

Thomas Malcomson (d1872) built Minella on the Coleville Road in 1863 to accommodate his family. It is unusual as Michael Ahern notes in his book The Quakers of County Tipperary 1655 -1924 (p.212) because it tended toward the architecturally extravagant and could be considered to run contrary to Quaker ethos of plainness and simplicity. Many of the other Quaker homes on the Coleville Road whilst large and functional do not possess the same sense of luxury on view at Minella. This is a trait possibly inherited from David Malcomson, who’s house Melview on the northern side of the town built in 1813 could be described as ostentatious for a member of the Society of Friends.

Minella was designed by the Dublin architect John Skipton Mulvany. The Dictionary of Irish Architects tells us that many of his important domestic commissions came from members of the Malcomson family. The National Inventory of Architectural Heritage describe Minella as

neo-classical house located on a fine site on the banks of the River Suir. Its form is enhanced by well-crafted decoration such as the window surrounds, balustrade and channelling and by the retention of features such as the timber sash windows and timber panelled door. It forms a group with the similarly executed gate lodge and well-crafted boundary walls and piers.

The Malcomson’s had a reputation for treating their employees fairly and like so many Quakers involved themselves in charitable works locally. This was particularly true of Eliza Malcolmson, Thomas’ wife (nee Murphy of the Murphy brewery family in Clonmel). Thomas died in 1872. Both the 1901 and 1911 Census of Ireland confirm that Eliza was still residing at Minella with several of her daughters at that time. Eliza Malcolmson died in 1913 at the age of 81. Some of Thomas and Eliza’s daughters remained at Minella well into the twentieth century (Lizzie (d1949, Caroline d1942 & Helena d1939). The Nallan Family bought the house in 1961 and following a two year renovation Minella was converted into a hotel. I still operates as a hotel today.