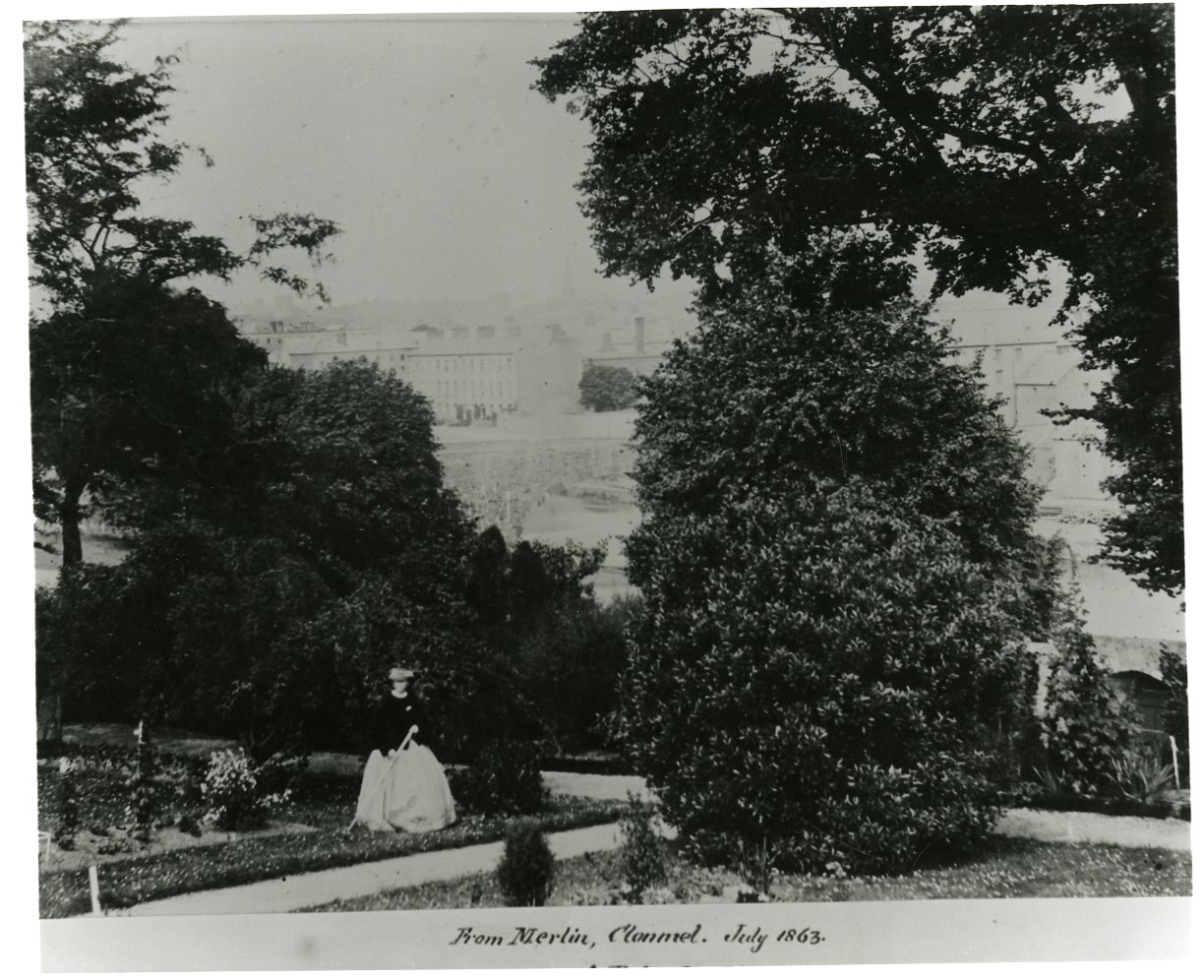 View from Merlin 1863. Image courtesy of the Tipperary Museum of Hidden History.

‘Merlin’ is one of the most prominent Quaker homes built on the Coleville Road (or Fairy Hill as the area was know in the 19th century). A newspaper report in the Nationalist dated 18/03/1950 references valuation records for newly built houses within the parish of Saint Mary’s. It records the values of these houses at various intervals during the 19th century. These records place the date of construction of Merlin between 1828 and 1839 by Abraham Grubb. Abraham Grubb (1777-1849) was the son of Samuel Grubb (17500-1815) of Castlegrace near Clogheen, Co Tipperary. The Grubbs had a vast portfolio of business interests centred in Clonmel. Like other Quaker families around Clonmel corn milling and textiles constituted a large proportion of their business.

Michael Ahern in his book Threads in a Clonmel Tapestry (p.132) tells us that Samuel Grubb sent Abraham to Clonmel to manage the families corn and butter interests there. By 1811 he had added a wine store to the back of his property on Abbey Street and a little over a decade later his business had expanded to include sail cloth, stockings, bags, coarse linen and shoe hemp. He had also become an agent for a fire and life insurance company. Sean O’Donnell’s profile of Abraham Grubb (Clonmel 1840-1900 Anatomy of an Irish Town, p.263) illustrates how Abraham’s social status reflected his success in business. He was treasurer of Clonmel Savings Bank from 1823 to 1844 and was also a freeman of Clonmel prior to reform act of 1832.

Like many of the other Quaker mansions on the Coleville Road, Merlin was built to reflect the families increasing wealth and desire to move out of town to a larger residence in the suburbs. However, Merlin could be said to be in keeping with the Quaker tradition of simplicity. Extravagant displays of wealth were frowned upon by the Society of Friends and Merlin’s modest and reserved design tell us that this was something Abraham Grubb took seriously. The National Inventory of Architectural Heritage describe Merlin as a…

Detached three-bay two-storey house over basement, built c.1840, with three-bay east and two-bay west elevations, flat-roofed Doric portico addition to front and two-storey addition to rear. The large scale and regular fenestration of this building make it an imposing feature on Coleville Road. It forms a group with the related structures of the gate lodge and gates to the northeast. The retention of the glasshouse and coach house with their timber and stone decorative elements show evidence of fine craftsmanship and add variety of materials and interest to the site.

Abraham Grubb died in 1849. Griffith’s Valuation ,1850, still lists him as the owner of Merlin (as well as a number of other homes occupied by Quakers on the Coleville Road). Sometime after this Merlin was sold to Benjamin Fayle (1825 -1901). The Fayles like the Grubbs were wealthy Quaker industrialists. Benjamin Fayle was in fact a nephew of Abraham Grubb. The Quaker community in Clonmel were tightly knit and almost all of the families were related through marriage. Marrying outside of the Society of Friends was frowned upon and most likely would lead to a member being disowned.

Benjamin Fayle took over the ownership and management of the families hardware business on Gladstone Street (then named Johnson Street) from his father Samuel in the late 19th century. The Fayles occupied many positions of civic responsibility in Clonmel. Benjamin Fayle served as a Justice of the Peace and as Governor of the lunatic asylum. His sons Edwin and Thomas were both members of Clonmel Corporation.

Newspaper articles, trade directories and census returns place the Fayle family at Merlin well until well into the 1930s. The 1901 and 1911 census returns for Merlin (see above) are interesting as the head of the household Alfred has converted to the Church of Ireland in the intervening years. This trend toward Anglicanism would lead to substantial decline in Quaker numbers locally. This decline is covered in detail by Michael Ahern in his book Quakers of County Tipperary 1655 -1924 (p.248-250).

Merlin is extant and is still occupied as a private residence today.