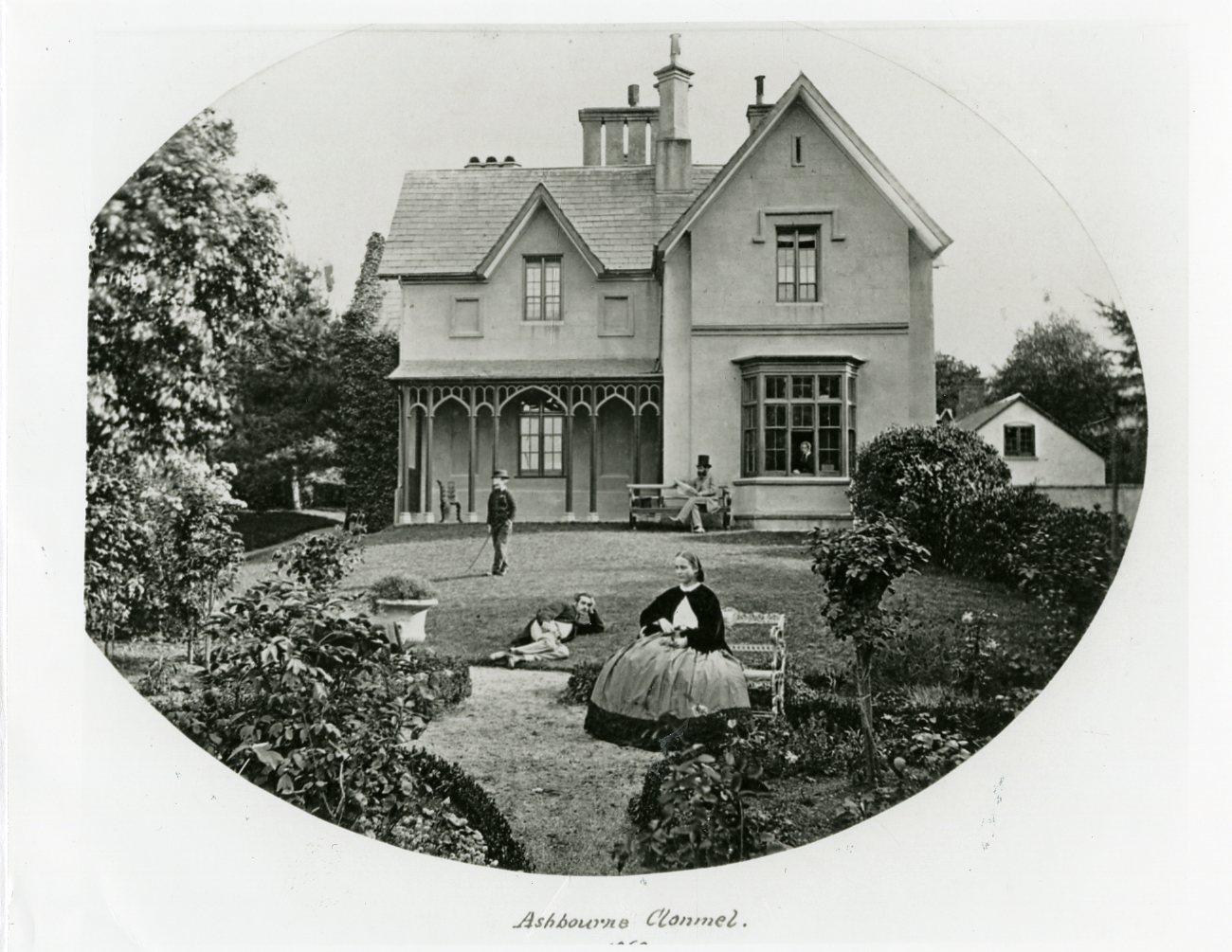 A posed photography of Ashbourne from 1863 taken by William Despard Hemphill. Image reproduced courtesy of the Tipperary Museum of Hidden History.

At the junction where the Coleville Road and the Mountain Road intersect are two old Quaker homes which have much in common. Ashbourne and Roseville were both designed by the much celebrated Clonmel born architect William Tinsley. Both can be described architecturally as being of the Gothic revival style with steep gables, pointed arches and clustered chimney pots. It is these features which set them apart from the other 19th century Quaker residences on the Coleville Road.

In the early 19th century the prosperous merchant and Quaker, Abraham Grubb, bought a tract of land at Fairy Hill. This would roughly comprise the area where today Ashbourne, Roseville, The Loretto Convent School and Merlin are situated . (See map below right: Griffiths Valuation 1850) Here, Abraham would build his own home, Merlin (Map ref 11). He would also go on to lease two sites to the Davis (map ref 14) and Murray (map ref 12) families. Both belonged to the local Quaker community, were prominent business people and desired larger and more comfortable accommodation in he suburbs of the town. This week will examine the life of Robert Davis and his home Ashboune.

Ashbourne is the older of the two Tinsley designs on the Coleville Road. A number of sources date its construction at 1830/1831. It was built by Robert Davis on a site he was leasing from Abraham Grubb. Records of subscriptions for the Quaker meeting house in Cahir for 1833 list Robert Davis as one of 31 ‘Clonmel Friends’. He was also admitted as a freeman of Clonmel Borough between 1832 and 1835. Like all of the Quakers who built homes on the Coleville Road at this time Robert Davis was clearly wealthy and influential. He was one of only eight agents in Ireland for the Friends’ Provident Institute, an insurance company with whom the Quaker community mainly dealt. Michael Ahern is his book The Quakers of County Tipperary 1655 -1924 tells us that the three generations of Davis family became in insurance agents. He was secretary of the Second Clonmel Annuity Company set up to provide for the widows and children of deceased members of the society of friends. Davis was also involved in the development of the railway line between Clonmel and Cahir.

Like many other Quakers in the locality Robert Davis was involved in providing relief for those stricken by the terrible famine of the 1840s. Davis was member of a the Clonmel famine relief committee, one of four auxiliary committees established by the Quakers in Munster. Their work centred around the provision of soup or porridge kitchens in villages and towns around south Tipperary.

The Tipperary Studies section of the library service in Tipperary has made available a podcast detailing a report made by Robert Davis to the relief committee. He describes what he saw on a trip about the south of county in February 1847. He paints a vivd picture of the wretched conditions of the people and death resulting from starvation. Available here: Podcast 40; A Quaker view of the Famine in South Tipperary | Tipperary Studies

The National Inventory of Archaeological Heritage describe Ashbourne as…

It is considered by many to be the most charming example of the gothic revival style in Clonmel. It is probably more ostentatious in its design than other Quakers homes on the Coleville Road such as Merlin but less so than others such as Minella. Griffiths Valuation 1850 has Robert’s son William Davis living at Ashbourne at this point. By the time of 1901 and 1911 census the Davis family are no loner to be found living at Ashbourne. A  notice in The Nationalist from 1911 tells us that Ashbourne as available to let. A newspaper report in the Nationalist from 1975 details the sale of Ashbourne from the estate of the late Mrs. Johanna Ronan to the  nearby Loretto Nuns.

Next week we will take a look a Roseville, the house adjacent to Ashbourne built by the Murray family around 1840.