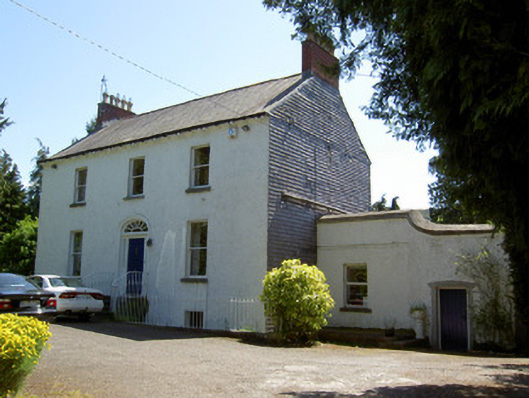 This week we continue our stroll down the Coleville Road to Brookdale. Like Glenview next door Brookdale was built on land owned by the prominent 19th century Quaker and miller Thomas Hughes. Pinning down a  precise date of construction for Brookdale is difficult. No trace of it is to be found on the first edition maps of the ordnance of Ireland. Meaning it was almost certainly built after 1840. It seems likely that Brookdale was built some time in the next ten years. Griffiths Valuation for the Coleville Road (1852) lists one Mrs Mary Luther as living and owning property in the area at that time. We know from newspaper reports that the Luthers were living in Brookdale by at least 1860. The story of this beautiful house, on what had rapidly become Clonmel’s most desirable neighbourhood of its day, can be associated with two families, the Luthers and the Beales.

A detailed architectural assessment of Brookdale is available here on the website of the National Inventory of Architectural Heritage.

Griffith’s valuation (below) confirms that Mary Luther was living  and renting property on Coleville Road in 1851 (Possible in Greenpark/Parkminster).  By 1860 the Luthers had moved in to Brookdale. This can be confirmed by a notice in the Leinster Express dated the 16th of June 1860 announcing the birth of a son to the wife of John Thomas Luther Esq. at Brookdale.  John T. Luther (1831-1898) we find out from Slaters Directory of Ireland 1856 was a solicitor and had an office at Bijon on Queen Street, Clonmel. The family had been involved in commerce in Clonmel for several generations. John T.’s father, also named John, had been mayor of Clonmel in 1848. The Luthers were Catholics and Sean O’Donnell in his book on nineteenth century Clonmel (p.271) tells us that John T. Luther was admitted as a Freeman of Clonmel Corporation in 1856 and served as town clerk for no less than 32 years.

The Luthers were politically influential. The Freeman’s Journal dated the 21st of August 1865 carries a report on the visit to Clonmel of Lord Wodehouse, Lord Lieutenant of Ireland. The Luther’s are noted as guests at the ball which was held at the Court House (now the Main Guard) to mark the occasion. John T. Luther is recorded as making a politically speech in favour of Edmond De la Poer of Gurteen, in front of a huge crowd in Carrick-on-Suir, the following year (Freeman’s Journal 19/12/1866). De la Poer would go on to elected MP for Waterford later that month. The Nenagh Guardian of the 7th of October 1868 places the Luthers at Brookdale. On this occasion the notice announces the birth of a daughter.

The occupants of Brookdale which followed the Luthers were the Beales and they were no less interesting. It is difficult to ascertain when Brookdale changed hands but an article in the Nationalist from the 20th of November 1897 mentions the Beale’s as living at Brookdale. William Beale (1820-1901) was a an Ironmonger and hardware merchant. He came from a well known Quaker family. William had his business premises at 3 and 4 Johnson Street (Now Gladstone Street). He had bought the business from fellow Quaker and Coleville Road resident Benjamin Fayle. This practice of keeping businesses with n the Quaker community was commonplace. William Beale was a colourful character by all accounts and had claimed to have dined with Daniel O’Connell.

The Beale family like many of their fellow Quakers were involved in works of charity in the local community.The Nationalist of 5th of May 1900 lists Mrs E Beale of Brookdale as active with the local branch of the National Society of the Prevention of Cruelty to Children. Michael Ahern in his book on the history of the quakers in Tipperary says that William Beale made large contributions to the temperance movement (p.87). The 1901 census return for Brookdale  (see below) shows that the Beales are present. William would pass away later that year and in the years to come Sophia, his wife, would move from Brookdale to Prior Park, Clonmel. She died in 1932. Both are buried in Quaker Graveyard on O’Neill Street.

Brookdale has much in common with its near neighbour Glenview. They are not on the same scale of grandeur as the homes built on the Coleville Road as the Grubbs (Merlin) or Malcolmsons (Minella). They probably lack the architectural significance of the Tinsley designs at Ashbourne and Roseville. None the less they are charming in their own way and have a lot of local history attached to them. Brookdale was bought and sold several times during the 20th century and is still a private residence today.