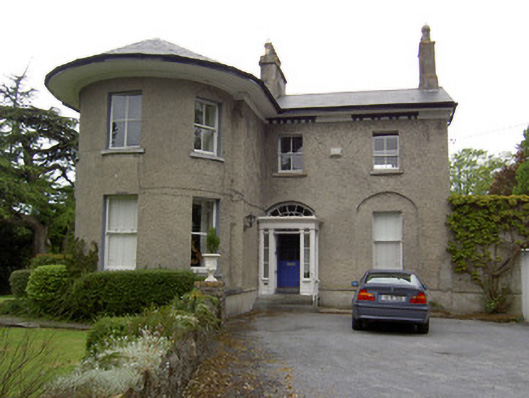 Glenam House situated on the south side of the Coleville is intriguing for a number of reasons. Like many of the homes on the road it is steeped in the heritage of the Quaker community in Clonmel. Its stands out because of some of its unusual architectural features. Many of the features including the bowed end bay and timber porch to front façade stem from a remodelling of the original 1820s dwelling which took place c1890. For the best part of a century Glenam was occupied by families who were members of the local Quaker community, the Strangmans and the Grubbs.

A detailed architectural assessment of Glenam House is available here on the website of the National Inventory of Architectural Heritage.

Griffith’s valuation records Mary Strangman (1791-1859) as leasing Glenam House from Thomas Hughes in 1850. Precious little information can be established about the Strangmans of Glenam. The Kings County Chronicle of Wednesday the 23rd March 1853 records the death of Anne Strangman at Glenam, aged 54. She is described as a respected member of the Society of Friends. A similar notice appears in the Cork Examiner at about this time. The Wexford Independent of Wednesday the 23rd of March 1853 features the death notice of Mary Strangman at her residence, Glenam, near Clonmel. Described as the daughter of Thomas Strangman Esq. It would appear that Anne and Mary were sisters, remained unmarried and lived together at Glenam. It seems almost certain that at one point Glenam was the residence of Thomas Hancock Strangman Esq. The Evening Freeman of Friday the 21st of December 1860 tells of the death of Sarah Strangman at Glenam informing us that she was the only surviving daughter of Thomas Strangman Esq. It appears this is where the Strangman association with Glenam House ends.

A few short years after the demise of Sarah Strangman we find the first reference to the Grubb family in Glenam. Michael Ahern’s The Quakers of County Tipperary lists Anne Grubb, Glenam, Clonmel as paying £12 subscription to the Tipperary Friends in 1866. The extended Grubb family had long been established at Merlin on the Coleville road and so it not surprising that another branch chose to move into an area that was home to so many fellow Quakers. Anne lived in Glenam with her sister Susanna (1820-1911). Their father Joseph Grubb (1768-1844) had had a grocery establishment in Clonmel. Susanna Grubb would turn out to be a botanist and artist of some note. A variety of newspapers reports from the second half of the 19th century attest to this claim.

The Clonmel Chronicle of Wednesday the 24th of July 1878 speaks of a robbery from the gardens and meadows around Glenam. We can see from the first and second edition of the ordnance survey of Ireland that he gardens attached to Glenam were extensive.  Susanna Grubb herself penned an article in the Chronicle on the 19th Jan 1878 entitled The Flora of Clonmel and its Neighbourhood. The same paper reports throughout the 1880s details of rain water measurements which were being taken with a  gauge at Glenam, presumable by Susanna Grubb.

Glasra (the journal of the National Botanical Gardens of Ireland) features a biography of Sussanna Grubb of Glenam by Mary J.P. Scannell (New series 4(2) 2008). In this article the contribution of Miss Grubb to the recording of flora in the south east of Ireland is detailed. It also tells of  considerable talent as an artists. She  produced 119 botanical illustrations (in watercolour) that were published in two volumes.

The census of 1901 and 1911 confirm that Susanna Grubb was still living at Glenam at that time. She is listed as one of original subscribers to Rev. William P. Burkes History of Clonmel in 1907. Indeed Susanna Grubb was, like so many Quakers was a great patron of the arts and very active in local charitable organisations. Susanna Grubb passed away on the 23rd of September 1911 at her residence, Glenam, Clonmel.