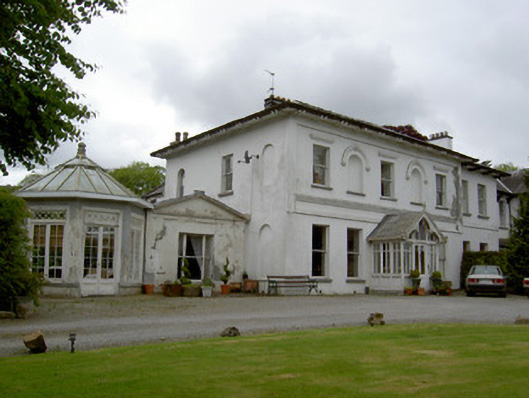 Fairy Hill House is situated half way down the Coleville road on the riverside. It is in fact two houses. The larger and older structure was original named Springfield House. It is clearly identified in both the first and second edition of the ordnance survey maps of Ireland. This puts its date of construction at about 1840. The National Inventory of Architectural Heritage suggests that Fairy Hill House is possible an extension of the original structure constructed at the end of the 19th/beginning of the 20th century.

The individuals and families which occupied the house provide an intriguing social commentary on the life of the wealthier citizens of Clonmel from the mid nineteenth century.

An interesting article appears in the Waterford News on the 5th of January 1849. It details the stripping and theft of 12 stone leads from Springfield. It tells us that the Springfield was the dwelling of Francis S. Prittie Esq. It goes on to say that this outrage was reported to Constable Connolly of the Old Bridge Constabulary. The attendance of the Mr and Mrs Prittie (of Springfield) at a military ball, is noted in the Clonmel Chronicle in December 1849. Griffiths Valuation tells us that Francis Prittie was leasing Springfield from the representatives of E. La Barte in 1850. On Saturday the 21st of June 1856, The Nation newspaper published a notice announcing the death of Susanna Prittie ,wife of the Hon. Francis S. Prittie of Springfield, Clonmel. Here the Prittie family association with Springfield ends. Several other references to the Prettie family can found later in the 19th century connected to Glenview house which is but a short distance down the road from Springfield.

In the early 1860 we find our first reference to Samuel Bewley Pim (1832-1896) living at Springfield. Bewley Pim was a Quaker and married to Mary Elizabeth Malcomson. The Malcomson’s were wealthy Quaker industrialists with business interests in Clonmel, Carrick-on-Suir and Portlaw. Part of the extended Malcomson’s family already lived on the Coleville Road at Minella. We know quite a lot about Samuel Bewley Pim from a diary he kept from 1855 to his death in 1896. Michael Ahern in his book on the history of the Quakers in Tipperary (p300) notes that

Bewley Pim was a keen gardener and took pride in the vegetables and fruits he produced at his house Springfield on the Coleville road, Clonmel .

Bewley Pim interests extended to meteorology and astrology. Michael Ahern describes him as a convinced unionist in his political outlook. Samuel passed away on 25 of January 1896. So time after this wife moved residence to Newtown, Co Waterford.

At the turn of the 20th century Springfield had new residents. Frederick J. Quinn was a wine and spirt merchant with premises on Quay Street. We know from 1901 census that Quinn was a Catholic making this one of the first instances of a Catholic owning one of the ‘big houses’ on the Coleville Road. Sean O’Donnell (Clonmel 1840-1900, p.286) asserts that Quinn was enthusiastic promoter of the Clonmel Free Library. He also amassed a valuable collection of oil paintings which hung at Springfield. His obituary in the Irish Examiner on the 10th of March 1931 describe him as one of Clonmel’s oldest and wealthiest merchants.