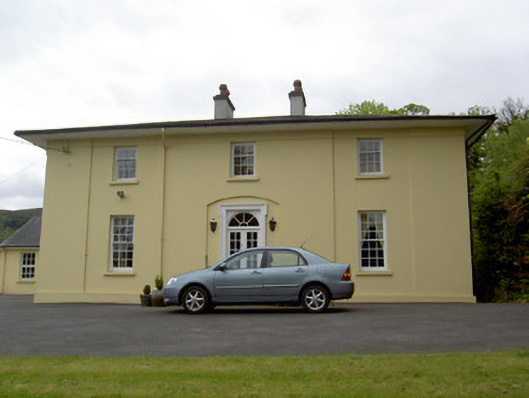 A detailed architectual appraisal of Greenpark is available on the webiste of the Irish Inventory.

One of the earliest references we have relating to Greenpark/Greenville comes from the Freeman’s Journal of the 8th of August 1856. Under Fashionable intelligence we see listed the attendees of a ‘Wedding in High Life’ at Rathronan. Included among the guests are Mr. and Mrs. Thomas Gough of Greenville.

Thomas Gough (1815-1885) came from Woodstown, Co Limerick. We learn this from genealogical research carried out by Turtle Bunbury into the lineage of the that family. He married Elizabeth William (d1890) of Clonmel. The Goughs were minor gentry and a family steeped in the British Military tradition. Local newspapers throughout the latter half of the 19th century place the Goughs at Greenville marking their attendance and various social occasions. These include marriages, balls, an archery fete at Gurteen and days out with the Tipperary Hunt. The latest reports in the newpapers concerning the Goughs come in 1883. Thomas died two years later and Elizabeth five years after that again in 1890. Both are buried in the graveyard adjacent the church in Marlfield.

Following the deaths of the Gough we find multiple references to Arnold Power (at times referred to as de le poer/Power) living at Greenville. An article from The Nationalist from the 19th of September 1891 tells us of Arnold Power’s (of Greenville) participation in the Clonmel Horse show of that year. Power came to Clonmel from Thurles where he had a practiced as a solicitor. He had a premises on Gaol Street. Some five years later we find that Arnold le Poer Power marries Elle Gertrude (daughter of Major EH Drake, Morley Square, Clifton) at the parish church in Cahir. A short article in the Nenagh Guardian (16/05/1896) relays the particulars of the wedding. The Power’s stay on the Coleville Road seems to have been a short one. By 1899 they have moved to Abbeyville a substantial residence on the Marlfield Road.

At all times Greenville seems to a have been a desirable property to the upper echelons of Clonmel society. The next occupant of Greenville was a gentleman by the name of E.A. Hackett who was the County Surveyor for the South riding of Tipperary. Two newspaper articles in 1906 detail Mrs. Hackett’s involvement in local charitable organizations. By 1909 Greenville is up for sale by public auction (See below) It is interesting that Arnold Power the previous resident of Greenville is managing the transaction.

The next person with which we can definitely associate with Greenville is Mrs. Wilson. An article in the Freeman’s Journal from the 27th of February 1914 tells of the proposed marriage of her daughter Gwlady Mary Chatterton to Kenneth Foulkes (of the 18th Royal Irish) . The notice tells us that Mrs. Wilson is widowed and her husband was T.B. Wilson formerly of the Royal Irish Constabulary.

In and about the 1930s Greenville became known as Greenpark and changed hands several times during the remainder of the 20th century. It sis still occupied today.