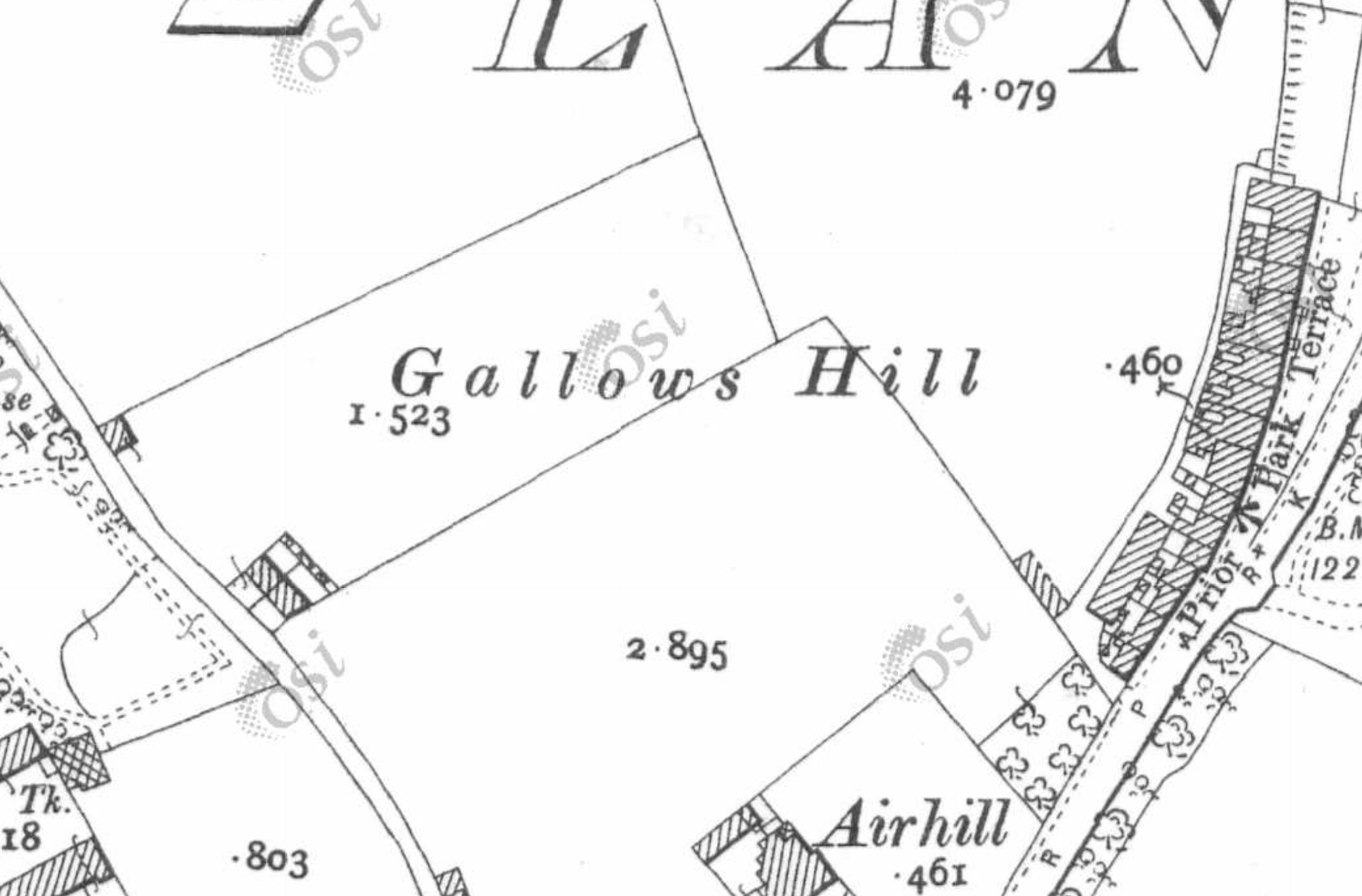 Around Our Town Ep. 39 – Darby Brahan: The most feared man in Clonmel

The name of Darby Brahan may not be familiar to the people of Clonmel today but in the mid 18th century he was quite possibly the most feared man in south Tipperary. If indeed you had the misfortune of coming face to face with Darby, it could mean that you were about to meet your maker. While much of what we know around Darby is shrouded in myth we can say for certain that he performed the duties of public executioner in Clonmel in the 1760s.

Several sources agree that Darby Brahan living just off Main Street (now O’Connell) in a laneway that bore his name ‘Brahan Lane’. This was approximately where the Allied Irish Bank and Graham’s Shoe shop meet today. It latterly became known as Dunphy’s Lane before eventually being blocked up completely. SJ Watson’s study of the first edition of the ordnance survey maps (1840) revealed that almost 20 such laneways ran off either side of O’Connell Street at that time.

Gallows Hill located above Melview and to the west of Prior Park Road (see map above) is where Darby Brahan plied his macabre trade. The last pubic execution took lace there in 1785 according to Canon Power’s History of Clonmel. The Clonmel Assizes was the court vested with the authority to try capital offenses. The assizes met an intervals during the year, sitting often for almost a week dealing with the most serious crimes in the jurisdiction.

A look at some of the judgments handed down at the Clonmel Assizes held in April 1794 tells us that falling foul of he law could have harsh consequences:

Bridget Ryan indicted for stealing sundry articles of property of Oliver Langly, found guilt (to the value of ten pence), sentenced to be privately whipped.

Walter Hayes and John Bourke, guilty of felony (theft) to the value of 4 shillings – sentenced to be transported for seven years.

Brian Murphy, for having on the 22nd of November last, at Creg road near Carrick, murdered his wife – sentenced to be hanged on the 24th.

Darby Brahan most infamous moment arrived on the 15th of March 1766 opposite Saint Peter and Paul’s Church on what is today called Gladstone Street. It was here that Darby Brahan carried out the hanging, drawing and quartering of Father Nicolas Sheehy. Even by the standards of the day the execution of a priest was regarded as shocking. Today, the trial of Father Sheehy on a trumped up charge of murder, is viewed by many, as an heinous act by a vengeful local gentry angered at the priest’s involvement in agrarian agitation.

We have several accounts on how Darby Brahan met his end. It is difficult to say if either have any actual basis in fact. One account which appears in the Nationalist newspaper on the 2nd of November 1991 claims that Brahan was stoned to death by an angry mob at an execution in Philipstown, Co Kilkenny. It goes on to say that his body lay untouched beneath the gallows for three days.

An alternative and more colorful narrative appeared in The Celt magazine in 1857. This version tells us that following an execution Darby Brahan attempted to remove a green silk vest from a the body of a man named Farrell. Traditionally the garments of the condemned were reserved for the executioner. However this angered the crowd present and Darby Brahan was knocked senseless by a stone thrown by a man atop a nearby lamppost. The blow left Darby an invalid and he is said to have seen out his day in Kilbeheny, Co Limerick.

There is perhaps an element of truth to this story. The National Schools’ Folklore Collection records a story from Anglesboro National School relating to Darby Brahan. It describes how Darby Brahan would be transported from house to house in a wheel barrow seeking charity from the people of the locality. He died when his barrow toppled into a stream and unable to help himself he drowned. If this indeed is what happened Darby Brahan it was quite the ignominious end for a man who was once the most feared in south Tipperary.