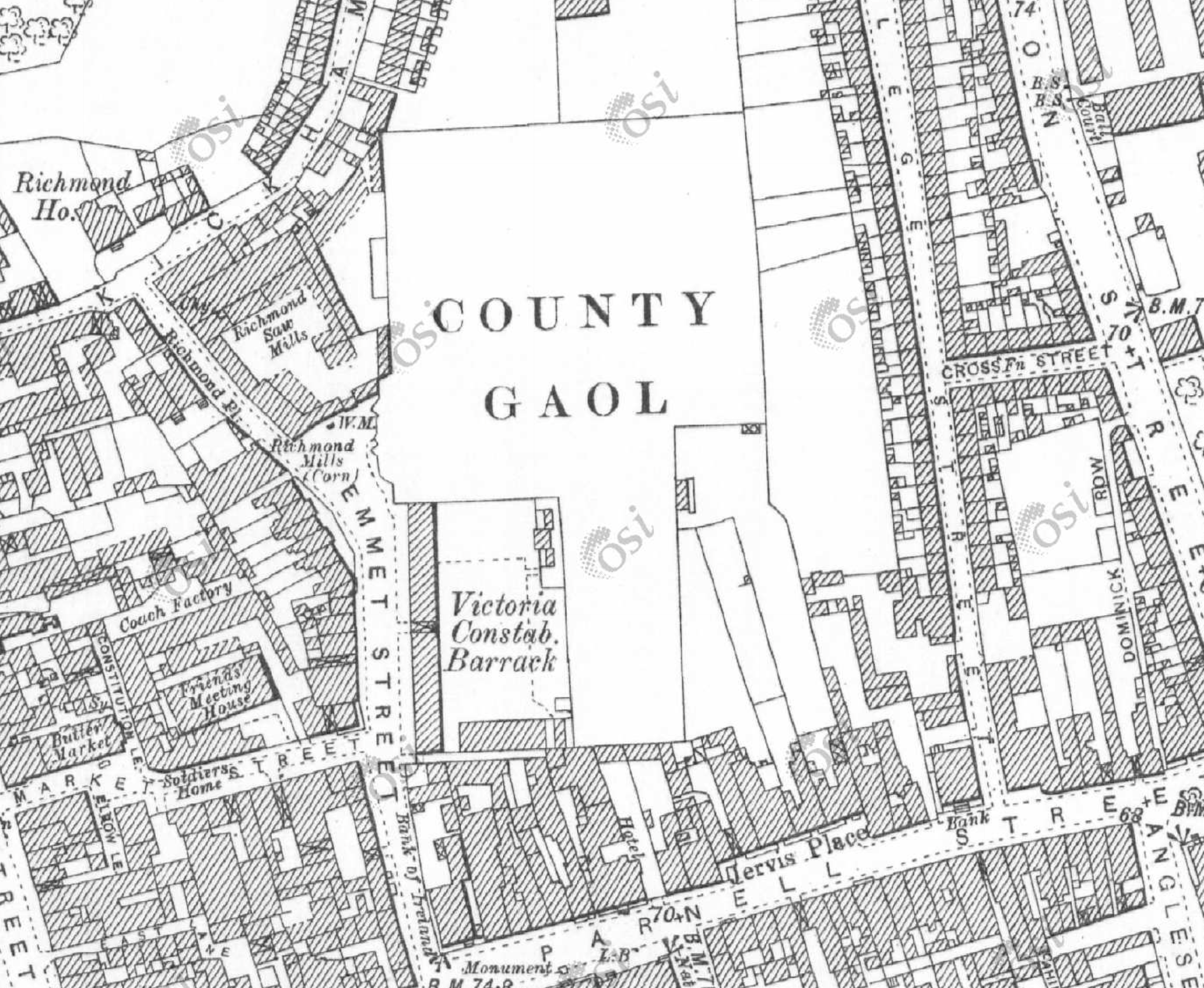 Around Our Town Ep. 40 – Escape from Clonmel Jail

On Saturday the 21st of September 1867 the Clonmel Chronicle reported news of a daring escape from Clonmel Jail. The escapee was the prominent Fenian Captain Lawrence O’Brien and the discovery of his empty cell on the previous morning sparked a countywide manhunt. O’Brien had been captured some six months previously in Cashel shortly before the the failed Fenian uprising of 1867.

Though O’Brien had been born in Cahir in 1842 he had spent almost all of his life in America. Like many others, his family had emigrated during those desperate years following the famine. The O’Brien family settled in New Haven, Connecticut. O’Brien would go on to become a bricklayer however at the at the age 19 he joined the Union army and fought in the American Civil War. O’Brien had a distinguished military career. He was promoted to Captain of D Company of the Ninth Connecticut Volunteer infantry in 1862. The Clonmel Scrapbook (White, p.213 ) tells us that he participated in a dozen big battles before being honorably discharged in 1864.

It is at about this time O’Brien became involved in the Fenian movement. John Francis O’Mahony, leader of the Fenians in America, was quick to identify O’Brien as a man who could be useful to the cause of Irish freedom. O’Brien traveled extensively to both Ireland and France on behalf of the Fenian movement. He carried information and money to senior ranking Fenians such as James Stephens and John Mitchel. O’Brien was one many former American Army officer who took part in the chaotic Fenian rising of 1867. Following his arrest in February of that year O’Brien was brought to Clonmel Jail to await trial.

Later, when safely returned to America, O’Brien would retell the story of his famous escape from Clonmel Jail. He said:

Ever since I had been brought to this Bastille I hoped to turn my military training to some account should any occasion present itself for my escape. I learned the number and duties of the guards. I viewed the premises carefully and made myself as well acquainted as possible with the situation of doors, walls and yards in the concern.

He revealed how he had had help from inside and outside of the prison. Prison guards with sympathy for the ’cause’ proved crucial. With the help of one of these prison guards O’Brien had been supplied with two Sheffield files. He spent the nights prior to his escape cutting the iron bars of the window of his cell. Another guard provided him with length of rope with a weight attached. He had also made arrangements with the O’Neill family of Lisronagh House to be picked up on the night in question and hidden in a safe house. Margaret O’Neill had visited O’Brien many times over the previous months putting together the details of the escape plan.

On the night of the 18th/19th of September Captain Lawrence O’Brien put his plan into action. Having cut the window bars the previous nights he attached the rope and lowered himself down about 18 feet to a level below. Here he used the weight to throw he remainder of the rope over the outer wall. He described how he dramatically swung against the prison wall before dropping to the ground outside. O’Brien injured himself in the fall and for a time lay helpless on the ground before eventually recovering himself and crawling away to safety.

The alarm was raised that morning when O’Brien’s escape was discovered. The Inspector General, John Lantaigne and the Governor Robert Grubb were sent for. They remained at the prison all day inquiring into the circumstances of the escape. Michael Ahern in his book on the history (2010, p.241) of the jail tells how police both mounted and on foot were dispatched to search for O’Brien.

O’Brien rested for a time with the O’Neills before changing his clothes and eventually boarding a train to Dublin. From here he made his way to Paris where he boarded a steamship, the Napoleon III, bound for New York. A deputation of Fenians greeted O’Brien at the dockside in New York where he was a escorted to a hotel in great triumph. The prison authorities’ humiliation was complete when an article appeared in the Nenagh Guardian in on the 29th of January 1868 welcoming Captain O’Brien home to New Haven, Connecticut.

Alternative accounts of how O’Brien made his way from Clonmel to America were circulated. One version, has O’Brien being smuggled to Waterford concealed within a hidden compartment in a cart. It seems that O’Brien was deliberately vague in this regard in order to protect the identities of those in Ireland who had helped him. Investigations by the authorities into the escape found that security and discipline at the prison were poor. Reprimands and fines were handed and some were dismissed. O’Neill for his part saw out the rest of his days in America, a free man.