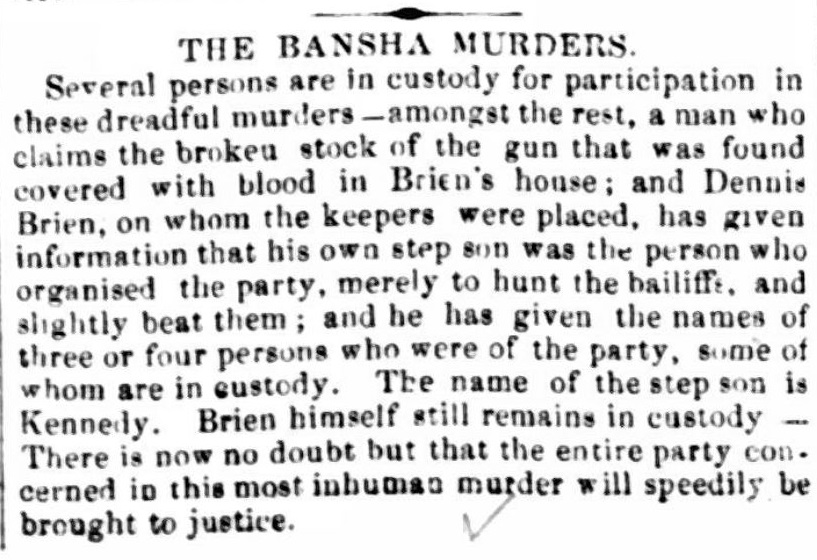 Around Our Town Ep. 45 – Famine Era Murders in County Tipperary

Dr Ciarán Reilly of Maynooth University describes 1840s Ireland as one the most dangerous places on earth. This statement on the face of seems extreme. A statistical analysis conducted by Richard McMahon (A violent society’? Homicide rates in Ireland, 1831–1850) offers a more nuanced appraisal. McMahon argues that the rate of homicide in Ireland in the first half of 19th century was only slightly above the average experienced by many other European countries. However McMahon concedes that there was areas of the country which at times experienced extremely high rates of homicide. McMahon points to Tipperary during the famine as being such an example. The county comprised only 5% of the population but accounted for 16% of all murders between 1841 and 1850. Its seems that in Tipperary that eviction, murder and starvation progressed in parallel with one another.

1846 in Tipperary was marked by protest and food riots in many of the larger towns. As the worst privations of the famine began to take hold through 1847 the people’s mood became altogether more violent. Many had made there minds up that eviction was tantamount to a death sentence. In this context, some sought to take matters into their own hands. Violent attacks on landlords, their agents and bailiffs rose sharply in 1847. In some cases individuals acted preemptively in the hope that an eviction might be prevented. In others, landlords or their employees were murdered out of revenge following an eviction. The famine led to people behaving in ways that would previously have been unthinkable.

In the 2nd of October 1847 William Roe was shot dead at Boytonrath, a townland near Rockwell. The murder took place between 10am and 11am as Roe walked along a public road. Roe was a man of substantial property and a magistrate of the county. His murder shocked the upper classes. In March the following year, John Lonergan an evicted tenant of Roe was hung outside Clonmel Jail for the crime. It was widely speculated that Lonergan had not acted alone or indeed if he had fired the fatal shot at all. Newspapers supportive of the gentry portrayed Roe as a benign and chartable landlord who was callously slain for merely exercising his rights over his property. Newspapers sympathetic with tenants took an opposite view. They argued that Lonergan had been evicted in August having paid over a sum of 5 pounds which he had been assured would secure his tenure until the following harvest.

In the same month as Roe was murdered an incident that lead to death of two men took place near Fethard. John Ryan was a steward in the employ of John Dalton Kellet Esq. of Clonacody House. Ryan was shot dead on the 31st of October as he walked home from work. Michael Cummins, a coachman for the Sadlier family, who was with Ryan at the time was shot in the arm. He later died from his injuries. No one ever seems to have been brought before a court for the crime. The only motive attributable to their deaths was that Ryan was involved in the prosecution of individuals whom he had caught stealing potatoes on the Kellet’s estate. The following week the Nenagh Guardian proclaimed that…

Scarce a week elapses without the commission of some inhuman and fiendish atrocities being perpetrated in our county. God only knows when these horrible murders, intimidation, and plunder, will end. The state of the country is every day becoming more appalling.

In mid-November a landlord by the name of John bailey was murdered near Nenagh. Before the month was out a sub agent of the Marquis of Ormonde named O’Donnell was shot dead in Kilcash. Perhaps one of the most shocking examples of famine era violence in Tipperary took place in the townlands of Rossadrehid and Curraghavoke between Bansha and the foothills of the Galtee Mountains. It was here on the night of the 7th/8th of October 1848 that three men, Edmond Regan, John Walshe and Timothy O’Dwyer were brutally murdered. All three were bailiffs.

The trouble stemmed from a warrant obtained by John Dalton, the poor rate collector for the Tipperary Union, against Redmond Brien, a farmer from Rossadrehid. The warrant permitted Dalton to seize a quantity of corn from Brien in lieu of his non payment of £4 of rates and arrears. A process known legally as distrainment. In an attempt to frustrate the process Brien removed the produce to the farm of a neighbour. This information reached the rate collector on the 6th of October, and he in turn sent Regan, Walshe and O’Dwyer out to secure the corn. What happened on the night of the 7th of October was nothing short of horrifying.

Patrick Cushin, a farmer in the townland of Curraghavoke, gave an eye witness account of the events of that night at the Clonmel Assizes in March the following year. He claimed that he and his wife were woken suddenly by the bailiffs seeking refuge from a group six or seven men. Cushin admitted the bailiffs. Soon after the would be assassins demanded entry and when refused the door of the house was forced open using heavy stones. Their assailants wore disguises and their faces were blackened. Walshe and O’Dwyer were killed in the house. One shot and the other bludgeoned to death with the stock end of the gun. Regan was dragged out of the house where he met a similar death.

Redmond Brien under cross examination conceded that his stepson Hugh Kennedy and group of accomplices were responsible for the murders. He insisted that the intention was to frightened the bailiffs and to drive them off. Hugh Kennedy and his friend William Quinlan were put on trial for the murders. Remarkably Kennedy was found not guilty however Quinlan was not so lucky. There seems to have been some question around whether Quinlan was in fact insane. Quinlan was sentenced to death but escaped the hangman’s noose when his sentence was later commuted to transportation for life.

The cases above illustrate the strain the famine was placing on communities in Tipperary. The possibility of eviction or the loss of livelihood was interpreted by some as a mortal threat to their existence. Landlords, their agents and bailiffs were all viewed as legitimate targets. The Great Hunger made a Tipperary altogether a more violent and dangerous place.